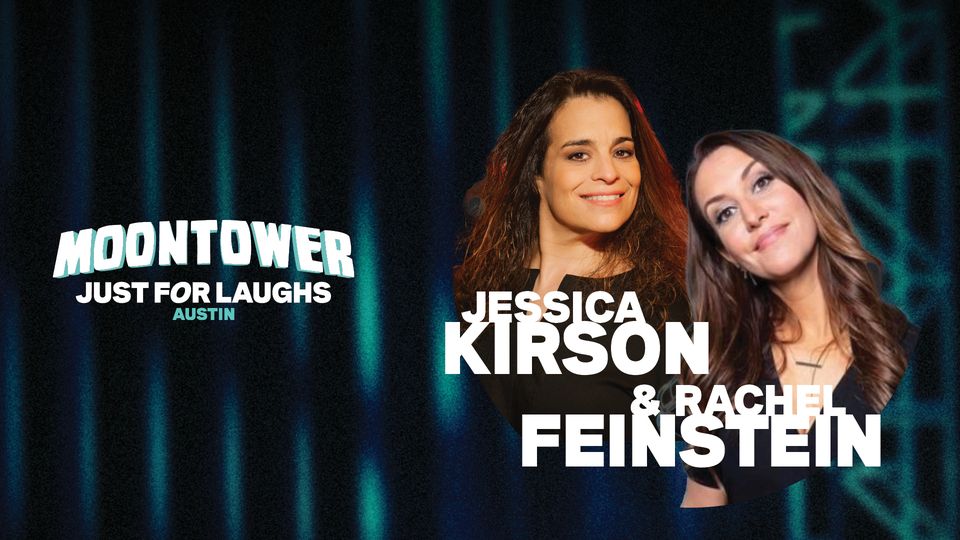 Jessica Kirson & Rachel Feinstein headline Moontower JFL Austin Comedy Fest!
Badges: Moontowercomedyfest.com
Single Tickets: tickets.austintheatre.org/7686/7687
Jessica Kirson is a powerhouse on stage. She´s a hilariously relatable performer of sheer silliness, vulnerability, and ridiculous characters. Her countless comedic character videos have racked up over 30 million views on social media. Her audience is multigenerational, creating an excuse for large groups of friends and families to spend a night out together. In an era where only 10% of all touring comedians are female, Jessica stands out as one of the strongest comedians regardless of gender. As her friend Dave Attell says, “I´d hate to follow her.”
Jessica´s new one-hour special Talking to Myself is executive produced by Bill Burr and will debut on Comedy Central on December 6th. This past year, Jessica was featured playing herself on the HBO series Crashing with Pete Holmes. She recently served as a consultant, producer, and writer as well as acted in the Robert De Niro film The Comedian. She is a regular on This Week at the Comedy Cellar, has appeared on The Tonight Show with Jimmy Fallon, The Tonight Show with Jay Leno, The View, and Kevin Can Wait. Jessica also hosts the Relatively Sane podcast and has interviewed the likes of Gary Gulman, Carney Wilson, Jim Gaffigan, and others.
She was recently awarded “Best Female Comic” by the MAC association in New York City and received the prestigious Nightlife Award for “Best Stand-up Comedian.” In her spare time, Jessica is a regular contributor to The Howard Stern Show, where she produces and stars in prank calls for the program.
Rachel Feinstein is a nationally touring comedian and actress. AV Club says “Feinstein´s acute observations create silly, sympathetic characters keeping her subtly, exquisitely attuned to her audience.” She has had three Comedy Central specials, including the most recent one hour special `Amy Schumer Presents Rachel Feinstein: Only Whores Wear Purple´. Rachel recently recurred on the Steven Soderbergh Amazon series RED OAKS and on Judd Apatow´s HBO comedy CRASHING. Her past credits include TRAINWRECK, TOP FIVE, THE NIGHTLY SHOW WITH LARRY WILMORE, HBO´s LAST WEEK TONIGHT WITH JOHN OLIVER, co-hosting THE VIEW on multiple occasions and several appearances on INSIDE AMY SCHUMER. You may also remember Rachel co-hosting alongside Shaq on UPLOAD WITH SHAQUILLE ONEAL. Feinstein has also lent her voice to Adult Swim´s VENTURE BROTHERS and the phenomenally successful GRAND THEFT AUTO video game franchise.
Moontower Just For Laughs Austin Comedy Festival | April 13-24
Get a badge to join us and see over 100 comics across 10+ downtown Austin venues! Star Badge holders will be able to choose this event as one of their headliner options.
Tickets for this event are not included with Satellite Badges.