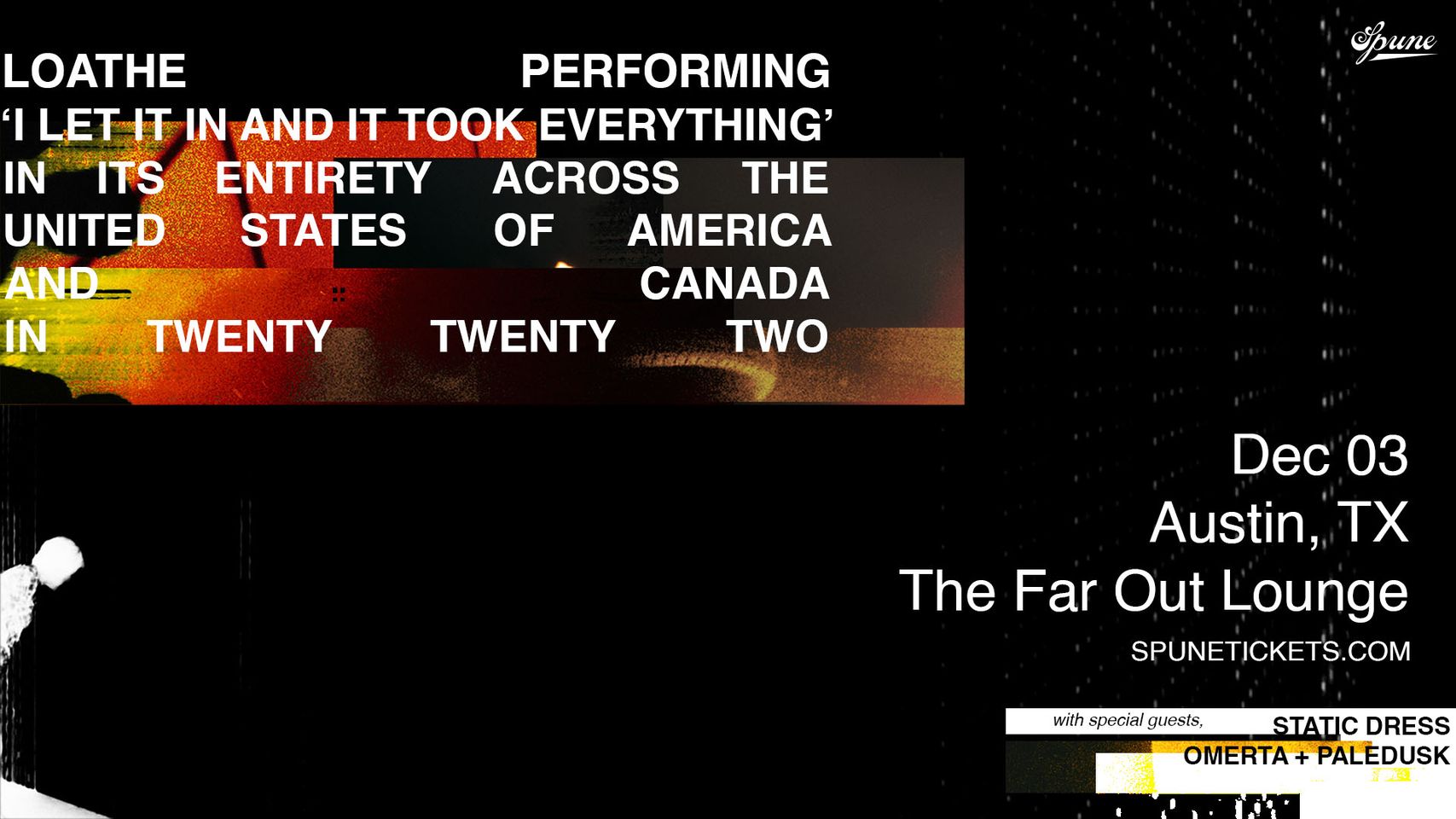 REPORT EVENT/PHOTO
Dec 3, 2022
07:00 PM
Get Tickets
The Far Out Lounge and Stage
View event on Facebook

Spune Presents Loathe w/ Static Dress & UnityTX at The Far Out Lounge on December 3
Loathe have been making waves in the British underground heavy music scene since their inception in 2014. Two Eps and one full-length debut album have already put them on the map and the band has already been nominated for Best New Band at the Metal Hammer Golden Gods and Best UK Breakthrough Band in the Heavy Music Awards. Their intense, visceral multi-media live show extravaganza has marked them out as a band who have ambitions far beyond that of their peers and now, with the release of their second full length album, I Let It In and It Took Everything, those ambitions are beginning to be realised.
Debut full-length The Cold Sun was a heady hybrid of meaty down-tuned riffs, lacerating screams and pile-driving rhythms. I Let It In and It Took Everything retains those elements, albeit delivered with a searing potency and sharpened focus that bests its predecessor in almost every conceivable way. Rather than existing within one style or taking one approach, Loathe pepper their music with a range of influences and musical motifs that move fluidly and give the Liverpool quintet a dynamism that was merely hinted at before. Their palette has widened significantly and surprises are plentiful; shimmering guitars, layered synths, unhinged guitar effects, a stronger emphasis on ethereal clean vocals and even elements that echo the sheer sonic brutality that epitomises black metal.
It all adds up to a release that is dynamic in extremis and yet remarkably cohesive as guitarist Erik Bickerstaffe attests. `I always want Loathe to be eclectic, a monster with many different faces but to make sure that it all sits in the same universe as well.´
A myriad of different influences are being thrown into the Loathe melting pot, some that people might expect and others that would likely seem inconceivable for a band with such an acerbic sound. Both Radiohead and The 1975 are cornerstones in the approach Loathe take with their music, partly in a sonic sense but mainly in terms of being a band who strive to do whatever they want and cultivate a fan base that will follow them down some deep, experimental rabbit holes. `We did a lot of what we wanted to do on The Cold Sun but there were some instruments that weren´t at our
disposal,´ Erik continues. `But I feel like we’ve ventured into different areas with this one. There’s so much more singing and there’s much more what I would call `traditional´ song-writing. We never want to abandon the crazy, sporadic metal side of the band, we just want all these other ideas to take root so that it furthers the lore of the band. I want us to be seen as this huge machine that can do whatever it needs or wants essentially.´
And then there are specific influences that stem from outside of music as well; the soundtrack to 2001´s survival horror videogame Silent Hill 2, the ominous, disturbing aura created by 2019´s most divisive film Joker or the entire works of serial brain scrambler David Lynch. That sense of distressing, Lynchian esotericism is the territory Loathe are intent on occupying, a world where nothing is quite as it seems, curiosity is rewarded and nothing is laid out in black and white. It´s not the easiest path to take, but then few paths worth taking are the easiest to traverse, an attitude boldly summed up in that arcane title, I Let It In and It Took Everything. `The idea of what we are doing and the recording of the album is `it´´ Erik explains. `We let in the idea of being in this band, and it took everything from us. Without trying to make it sound like a sob story, we needed to build ourselves up again in order to make this record.´
The likes of Aggressive Evolution and New Faces in the Dark will be familiar to those already acquainted with the band´s dizzying hybrid of industrial bluster and hardcore energy. But the process of re-building themselves really starts to show itself on the expansive, lush instrumentation of Two-Way Mirror or A Sad Cartoon, songs that feel like a new string to add to Loathe´s burgeoning bow. Red Room is a short, sharp burst of adrenalized noise-core whilst Heavy is the Head That Falls with the Weight of a Thousand Thoughts features an abrasive incandescent performance from vocalist Kadeem France that has to be heard to be believed. It seems Loathe´s desire to never be pigeon-holed is as strong as it´s ever been. I Let It In and It Took Everything opens up Loathe´s horizons and proves that they can sound however they want to sound. `We’re not here to add to someone else’s legacy,´ says Erik. `We’re trying to create our own.´