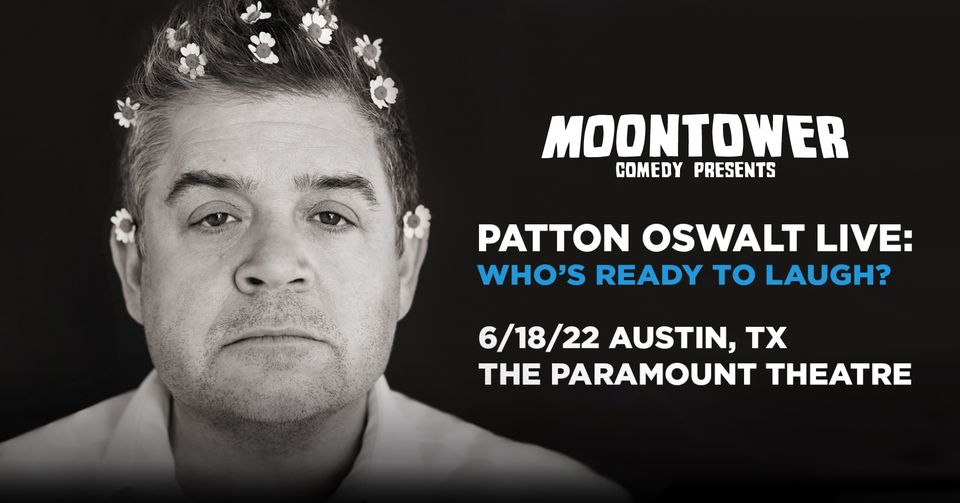 Moontower Comedy presents
Patton Oswalt Live
Who’s Ready to Laugh?
The Paramount Theatre
Saturday, June 18, 2022
Doors: 6pm
Show: 7pm
Doors: 9pm
Show: 9:30pm
A comedian, actor, and writer, Patton Oswalt continues to find success in all areas of entertainment. From his award-winning comedy specials to his many memorable film roles and guest appearances on his favorite TV shows (including “Parks and Recreation,” for which he received a TV Critics Choice Award), Oswalt continues to choose work that inspires him and entertains audiences. He recently created M.O.D.O.K., the new Marvel stop-motion animated adult comedy series for Hulu as well as voices the titular character, and currently co-stars as `Principal Durbin´ on the NBC Universal comedy “A.P. Bio,” produced by Seth Meyers, Mike O´Brien, and Lorne Michaels. Oswalt also recently served as the lead voice of `Max´ the dog in THE SECRET LIFE OF PETS 2.
In 2020, Oswalt´s Emmy and Grammy nominated Netflix special “I Love Everything” was widely applauded upon release – “I Love Everything…is one of the best stand-up sets you´ll see this year,” according to RogerEbert.com; he also received a Grammy nomination for his comedy album of the same name. In 2017, he received Grammy and Emmy nominations for his album and Netflix special “Annihilation,” which addresses his own devastating loss and dealing with the unexplainable, while making it all painfully funny. In 2016, he won the Emmy for ‘Outstanding Writing for a Variety Special´ for his sixth comedy special “Talking for Clapping” and a Grammy Award in 2017 for his comedy album of the same name.