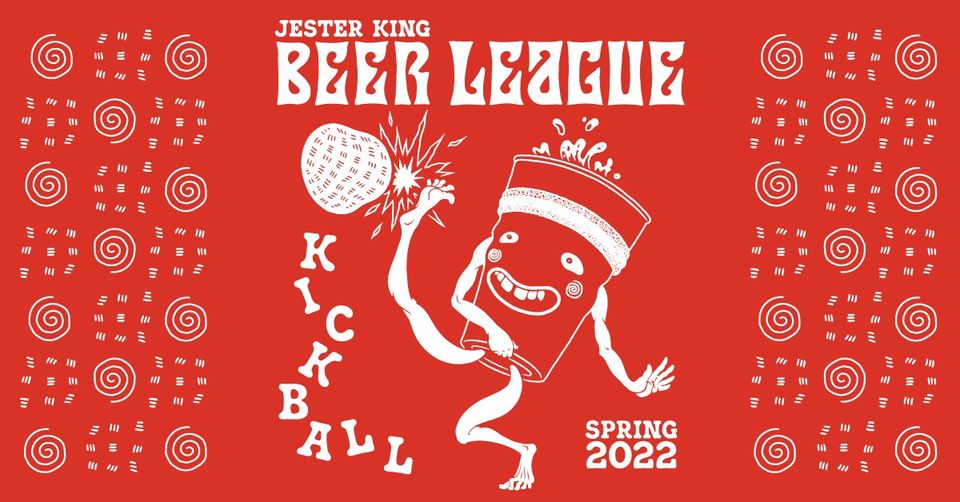 Announcing Jester King Kickball League! Learn about how to sign up for our Spring league below. First game is on March 16th! Purchase membership ticket here: jesterking.menu/kickball
— MEMBERSHIP TICKET: $125. Includes shirt, stadium cup, and beer fills for each regular season game. Teams that make it to playoffs will be provided beer fills for those games.
— DAY PASS: $25. Includes stadium cup, and beer fills for that day’s game
— TIME: WEDNESDAYS @ 6PM (CHECK-IN) GAME START @ 6:30PM
— Emails to members will go out on Mondays to determine which field and team you will be playing against.
— Check-in for new players/day players will be at the host stand in the Pole Barn. Tickets can be purchased there, as well as signing waivers.
— HAVE A TEAM? Please type in your Team Name in the prompted box when purchasing your membership pass here: jesterking.menu/kickball
— NO TEAM? NO PROBLEM! Please select that you are a Free Agent, and we will plug you into a team! If you are wanting to play with someone specifically that is also signing up, please write in the comment box, “Free Agent, but want to play with [insert name(s)]”
RULES FOR PLAY:
— Must be 21+ (We will ID you at first check-in when you sign your waiver)
— Teams must have a minimum of 8 players, maximum 20. We will have a maximum of 10 teams per seasonal league.
— There will be 9 innings for each game, that will be self-referee’d. PLAY FAIR, HAVE FUN, DON’T TAKE IT TOO SERIOUSLY. ANY TEAM/TEAM MEMBER FOUND BEING AGGRESSIVE, CHEATING, OR NOT PLAYING FAIRLY WILL BE REMOVED FROM THE LEAGUE WITH NO REFUND.
— Members must hold a beer at all times during gameplay. If you are playing offense and you drop your beer or spill your beer to the point of having none left in your cup, you are out. If you are playing defense and drop your beer or spill your beer to the point of having none left in your cup, the other team gets a free base.
— Beer is provided by Jester King via kegs at the fields. The beer will be poured by a Jester King staff member only. ANYONE CAUGHT BRINGING OUTSIDE ALCOHOL INTO THE GAME WILL BE REMOVED FROM THE LEAGUE WITH NO REFUND.
— Aside from the added drinking rules, the traditional rules of kickball will be used. You may ask any clarifying questions at the check-in desk, or email restaurant@jesterkingbrewery.com
SPRING 2022 LEAGUE DATES:
March 16
March 23
March 30
April 6
April 13
April 20
April 27
May 4 *Star Wars Themed Game Day*
SEMI-FINALS: MAY 11
FINALS: MAY 18
Weather Cancellation Policy: Games will continue rain or shine, but in the event of a weather cancellation, additional days will be added to the end of the schedule to make up for it (thus pushing semi-finals/finals games). Weather cancellations will be sent via email by 11am on game day.
Unable to make the Spring season? Feel free to consider our Summer or Fall Leagues – tentative dates posted below.
SUMMER 2022 LEAGUE DATES (TENTATIVE):
MEMBERSHIP ON SALE: May 18
June 15
June 22
June 29
July 6
July 13
July 20
July 27
August 3
SEMI-FINALS: AUGUST 10
FINALS: AUGUST 17
FALL 2022 LEAGUE DATES (TENTATIVE):
MEMBERSHIP ON SALE: August 17
September 7
September 14
September 21
September 28
October 5
October 12
October 26 **Halloween Costume Game**
November 2
SEMI-FINALS: NOVEMBER 9
FINALS: NOVEMBER 16